I've spent the past few days putting together an application to Backpacker Magazine to become an Ambassador for their Get Out More Tour.  The job includes traveling around the country, speaking at retail locations and outdoor festivals.  Can you imagine?  Getting paid to travel and talk about hiking?

To get the job, I first need to convince them that I'm an experienced hiker.  I could tell them that I'm a Triple Crowner (AT 2011, PCT 2012, CDT 2014) but I'm prouder, still, to have been the first to hike the 924-mile Ironwood Trail as well as being the first to hike the Great Lake to Lake Trail. During those hikes, I interacted with more than just other long distance hikers; I had the chance to influence people I met along the way and encourage them to get out and hike. That led to me being nominated for a Governor's Fitness Award and the opportunity to spread my message about the health benefits of hiking to a wider audience.

I think my experience with public speaking will really help me as a Tour Host. I've been honored to have been asked to speak at the Caroline Kennedy Library a couple of times as well to smaller groups like the Scouts and some hiking clubs.  Coming up, I'll be at the Berkley Library on January 20th and I'll be heading to Spokane, WA later that same month to speak to the Burning Boots Trail Club.

As part of my application for the job, I even filmed a video and posted it to YouTube.

If you think this job is right up my alley, please leave a comment below. 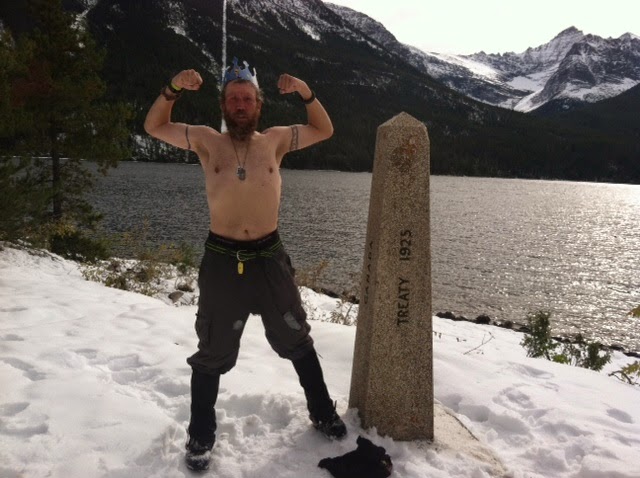 Up your alley? The job description reads like your resume. Whether or not you get the job, you're already the best ambassador for hiking and moving that I know. Good luck. They would be lucky and smart to have such an erudite writer/speaker representing them.

There is absolutely no one better for this gig! You have the miles, you're super passionate, and are an absolute blast to listen to!

Hi it's Xena...I think Chris would be perfect for the job! He has thousands of miles hiking. He is dedicated to the hiker life and helps others achieve their hiking goals. He would be a great ambassador to teach & inform & helping others wanting to pursue hiking adventures.He is a Triple Crown Hiker as well. All his experience makes him perfect for the job!

I could't think of another person that I would want to speak on behalf of hikers. Your enthusiasm, experience and great heart make you a perfect Ambassador, Wolverine!!!

Fit for the job, Wolverine!

Knowing Chris only from a 2-hour conversation while he was on the CDT this summer, I was more influenced by him than some people I've known for years. His passion for hiking & the outdoors are inspirational & contagious. There's no better motivator & representative for the job!
Best of luck, Chris!!

I've done a bit of writing for backpacker magazine. I would love to talk to you about it sometime. Great job? Maybe. Tons of politics though. Good luck to you my friend.

We have been advocates of Chris's passion for extreme hiking since we first realized that is what he wanted/needed to do to make his life complete. We have encouraged him to go for it, and live his dreams all of his life. We have promoted his hikes thru the AT, PCT, and CDT, as well as his innovative trailblazing in his home state of Pure Michigan that earned him recognition from state leaders.During his hikes we were contacted to do gear reviews by several hiking and backpacker magazines including Seattle Backpacker, Backpacker, and Outdoors. We will continue to explore social media avenues to promote Chris's journey and adventures to come and hope that Vegas is on his agenda some time soon, as there are many trails to explore here that he would love.
Jim and Patti Hillier


Hey Backpacker Magazine! Mr. Chris Hillier is the real deal! Lives and breathes backpacking and all it entails! Frankly, this video just scratches the surface. As a speaker Chris naturally grabs everyone's attention while being very modest; he smiles a lot, is good for a laugh, and LISTENS well!!! ... NOT some yahoo bragging about his last exploit! He's CONVERSATIONAL and somehow you feel after talking to an everyday guy like him that, yes, you could do that, too!!

He mentored me (I was very leery) at my very first beginner's hike April 2013, and I ABSOLUTELY credit him with developing my love of backpacking, "outdoor therapy," and getting into shape! (A few months, and many practice hikes later, I did a 6 night wilderness trip!!!!) He is always FRIENDLY, APPROACHABLE, HELPFUL, AND ENTHUSIASTIC! He never hesitates to say "SURE" when I've asked him to speak to the scouts or at my daughter's school. He easily relates to urban, suburban, and rural folks, who all need to hear the message he LOVES AND LIVES TO SPREAD! (He started his Michigan tour right through the heart of Detroit!)

I LOVE YOUR MAGAZINE AND WOULDN'T STEER YOU WRONG! You would NEVER BE SORRY for hiring a man who is an UNSTOPPABLE ADVOCATE FOR BACKPACKING / THE OUTDOORS... recognized by our GOVERNOR. He is fully deserving of this position, and the title of Ambassador for Backpacker Magazine's Get Out More Tour.﻿

I met Wolverine thru-hiking the PCT in 2012 and we quickly became great friends and hiked many wonderful miles together.

We had a number of conversations about a hiker's responsibility to be a good "ambassador" for the trail. Whenever we'd meet people in town or on the trail he would go out of his way to represent hikers positively, and help to inform and encourage folks to get out and enjoy these wonderful trails.

I don't know many folks who "GET OUT MORE" than Wolverine!

In reading the wonderful and thoughtful comments "promoting" Chris one thing is for sure, hiking is more than a passion of Chris's. It is in his blood. Beyond his skills which speak through his experience and success at achieving the "Triple Crown" it's his ability to connect with people and transfer that deep connection to hiking to others. His kindness, patience and knowledge transfers easily to those starting out or wanting to take it to the next level. He is more than qualified for this job and adventure but more importantly he has the passion that is infectious and sure to draw a crowd!

Wolverine, this job would be absolutely perfect! Your knowledge of the wilderness is unsurpassed and you actually LIVE your philosophy as opposed to being a "weekend warrior." Not like there's anything wrong with that; you've just taken it a few steps further! You've got it covered on all fronts - especially public speaking! You interact wonderfully with the community at large! Backpacker should be honored to have you as part of their team of enthusiasts. Rock it kid!

Chris, you are an inspiration, a motivator and a friend. When I read this job description, I KNEW it was for you! As a recruiter, I know a thing or two about recruiting the right people for the right jobs! Aside from that, you are one of the most capable and qualified individuals for this role. I have been thinking about this for a while and, maybe I should have asked your permission, but I wrote a blog about you and this job. Hope I did you justice! All the best and good luck to you! I KNOW you will be awesome!
Here's a link to the article: http://www.rftsearchgroup.com/2014/12/an-unintentional-motivator/

Chris,
You are already a de facto ambassador for getting outdoors! I strongly encourage Backpacker Magazine to make it official and enlist you in their corps to “Get Out More.”

Your two presentations at the Caroline Kennedy Library were highly successful with high attendance and audiences that didn’t want to leave! Your passion for hiking and the outdoors is evident in your personality and your presentations. You are supremely qualified with your extensive knowledge and experience of long distance hiking, your effective communication skills, and your ebullient personality.

Furthermore you are a tremendous inspiration to the common man/woman. You are modest in saying that your hiking accomplishments are “just walking.” I think that’s your way of encouraging everyone to get out more, whether for minutes, hours or days. Also, I’m inspired that that you are outdoors in all kinds of weather, including the Michigan winter months of ice, snow, and sub-freezing temperatures.

Also, your preference for our library donating to the Michigan Trails and Greenways Alliance rather than accepting a speakers fee tells me that you love talking about your hiking experience and that you’re more concerned with the big picture of improving our State’s recreational offerings by adding and improving trails.

Chris, I would be happy to serve as a reference and talk directly to the people at Backpacker magazine. You would be fabulous as an Ambassador to get outdoors more!

Chris , we at Honor Point USA are very impressed with your grit and drive. We absolutely picked the right person to help test and develop our first long range pack The Divide. Your reports of your trip on the CDT were outstanding and your feed back was to us grand. As you know your trip was follow by our followers on our Facebook pages during your trip.
As a company that only makes American made products we are proud to be associate with a Badass American like yourself .We can hardly wait for your next adventure.
Jack Graham
Honor Point USA