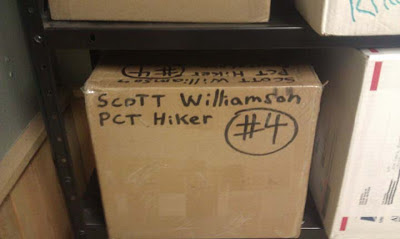 What follows is absolutely a true story. The main characters in this story are myself, my buddy Astro and PCT Legend, Scott Williamson. Me, you don't need to know much about except that I thru-hiked the PCT this year and that I have an unhealthy man-crush on Scott Williamson. As a kid, I wanted to throw a baseball like Mark Fidrych of the Detroit Tigers. As a teen, I wanted to play guitar like Eddie Van Halen but as an adult, I want to hike like Scott Williamson. I read everything I can find about the guy. I got my hopes up that I might actually meet him on the trail this year but he abandoned his SOBO hike, I understand, because of all the fires. And I'm not the only one obsessed with all-things Scott Williamson. When I confessed that I took a picture of his re-supply box at Big Lake Youth Camp, my buddy Hee Haw admitted that he did the same thing.
You need to know about Astro. The kid was two semesters into a physics degree at Berkley when life tapped him on the shoulder and said "Congratulations. You have stage 4 Hodgkin's Lymphoma." Astro bravely underwent a stem cell transplant but the cancer persisted. When his oncologist wanted to go with more chemotherapy, Astro declined and started looking into alternative therapies. In order to make his mind and his body more receptive to healing, he decided to hike the PCT. The kid's out here fighting cancer and I'm bitching about blisters. He puts things into perspective and it was my honor to hike with him. Learn more about Astro here.
Astro, it turns out, also stayed at the Big Lake Youth Camp. As he picked out his re-supply box off the shelf, he also saw Scott Williamson's abandoned box and he noticed the ETA written on it was 8/21/12. This was mid-September. Scott was definitely off the trail. That was a shame because Astro, too, is a big fan.  Astro opened his own re-supply box and was shocked to see too little food. A miscommunication had lead to this box having only a couple days of food in it when Astro's next stop was more like five to seven days away.
You also need to know that, at this point in his life, Astro believes in signs. He believes that sometimes things are the way they are for a reason. Sometimes things are where they are for a reason. Like Scott Williamson's box, full of food, sitting on the shelf when Scott himself was clearly off the trail. Astro badly needed food - there was the food of our hero! Astro opened Scott Williamson's box! I assure you that as Astro was telling me this I yelled "You what!?" Followed immediately by "What was in it?!" Astro gave me a detailed account of all that was in the box. I listened closely, amazed and fascinated. Astro did indeed help himself to Scott Williamson's food as well as something else that was in the box... A pair of Scott Williamson's socks. They seemed to be just regular men's nylon dress socks but when Astro wore them he hiked the most miles he's ever hiked in a day: 29.6.
Astro ate Scott's food, wore his socks and even tried to mix up and drink some kind of green powder that was in the box. Ended up making him really sick. I think Astro took these things half out of necessity and half out of hero worship.  We all wanted to look inside the box but Astro was the only one with enough guts to do it.  He also had the guts to write Scott a letter explaining who he is and why he took the food. He put the letter in the box and re-sealed it, hoping it would make its way back to the world record holder.
I'd like to think that if Scott was there and he knew who Astro was and what he was dealing with out here, he would offer up anything in that box and more. Scott Williamson is a hero of mine and so is Astro. Now, if I can just get him to loan me those socks!
Posted by Chris Hillier at Wednesday, November 07, 2012

Brilliant Wolverine, just brilliant. I can still hear you reading this out to us in Stehekin.

Thanks, Typo. Man, I miss you guys. Me, you, Scallywag, ED and Hee Haw all chillin' in the cabin in Stehekin. All of us warm and dry and filled with excitement about the trail coming up. Those were good times. I'll be glad to get back out on the trail this Saturday. Keep in touch!

Andrea Dinsmore just forwarded me your blog post, this is Scott's wife Michelle. Love this story! Just read it to Scott and we got a giggle out of it. Just wished we got Astro's letter! Scott was laughing because he said that was one of his fully stuffed box with lots of goodies because there is not a store to buy treats. Glad to hear that Astro helped himself and enjoyed his findings. Scott was hoping a hiker would help himself. Just blushing a little because I am wondering what love letter was in the flaps of the box! LOL I would have to say Astro is my hero this year! Super inspired by his story and think he is absolutely amazing! Thanks so much for sharing your story.

Dear Michelle - Holy Cow! Scott Williamson's wife commented on MY blog? Scott himself actually read it? Do you know what kind of 'trail cred' this gives me? Other hikers claim to have met the two of you all the time but they also claim to have invented the backpack. This is proof! I am so honored! They read my blog! To be honest, I was afraid that you would be angry - Astro did, in fact, break federal law by going into Scott's mail and stealing his stuff but, as I wrote in the story, if you could meet this young man and hear his story, you'd want to help him. The fact that you reacted with humor and grace makes you even more of a legend. Both of you! Someday, somehow, I hope to meet you. In the meantime, my hiker buddies and I will continue to pour over the details of Scott's life and achievements. Is it true that he's 12 feet tall and made of carbon fiber?

Hi Vit - Thanks for reading. Are you back in the Czech Republic? How are you doing? Wolverine

Yes, stealing a resupply box is not a good thing to do and very risky! But Astro got SUPER lucky because Scott had already called Big Lake and released his box to the hiker box. I guess they just didn't empty it out to the hiker box yet. I am just happy it went to someone in need. 12 feet tall and made from carbon fiber....huummm...that's a new one! LOL