I want to write a post about a small market I happened to come across during my 2011 thru-hike of the Appalachian Trail (AT). Back then, the store was called 'Joe To Go' and it was on the south side of where the AT crosses (the very busy) State Road 206 in New Jersey. It was kind of a cool little shop. There was an old guy behind the counter serving greasy breakfast sandwiches and burgers. Back then, they weren't exactly known as 'hiker friendly'. Back then, a breakfast sandwich was $4. Back then, I stopped in, felt the unwelcoming vibe and immediately went back to the trail.
Recently, the store was bought by an older guy who re-named it Sunrise Appalachian Trail Deli. 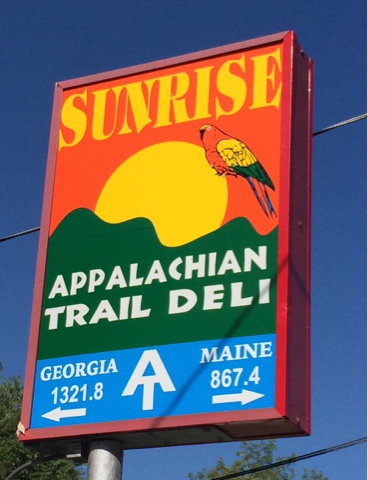 His intention, it seemed, was to cater specifically to AT hikers. That to me, is a great idea and it fills me with gratitude. He wants to help hikers! He started carrying some hiker supplies (Ramen noodles, Cliff bars, canister fuel,  etc... ) and he put out a notebook for hikers to leave recommendations on what products they thought that he should carry to better serve the hiking community. More great ideas!
The comments left on Guthook's app and in the shelter journals along the trail were all very positive. Everyone said how 'hiker friendly' this place had become and how hard the store was trying to attract and accommodate hikers. I can't wait! I thought to myself, to spend some (of my very little) money here and to show them how much I appreciate that they appreciate hikers.
But the attitude with which I was welcomed left much to be desired. The guy who actually ran the place, day to day, you see, was not the guy who bought the place. The guy who ran the place had a different perspective entirely. He was the one who came in early every morning. He was the one who made the sandwiches and the burgers. His pay, I learned later, was based on how well the store did in overall sales.
He wanted to sell cigarettes, lottery tickets and energy drinks. He wanted to have a big cooler full of ice for the tourists. But the new owner would have none of it. "Those things are poison!" the new owner exclaimed, "And those aren't the kinds of things that hikers need."
Back to the guy who had to work there everyday. He was not so hot on hikers. He didn't like it that they sometimes brought their packs (all smelly and dirty) into the store despite the obvious signage telling hikers to park their packs on the bench outside. He didn't like it that they complained that he didn't have wifi or group seating. And he really didn't like it when one of them stole the money out of his tip jar.
The guy mentioned that the owner wanted to start accepting re-supply boxes for hikers. I had to warn him that hikers get really uptight about their re-supply. If a box isn't there when it's supposed to be, they freak out. Worse, they won't move on until they get that box and will literally camp near that business until that box comes in. They will check dutifully twice a day, every day because they literaly can't keep hiking until they get the food, fuel, maps, etc... that come in those boxes.
My point is that thru-hikers are a tough bunch to handle. They are often strapped for cash and looking to get the very most for their few dollars. I hate saying it because it's trite but true about any small group: A few bad apples. Most of us want to support a business that welcomes hikers. We want to leave a good impression.
My hope is that hikers, as a group, will get their shit together and respectfully patronize businesses that welcome us and that more business owners will recognize that hikers want to spend their money at stores like the Sunrise Appalachian Trail Deli.
Posted by Chris Hillier at Wednesday, September 09, 2015